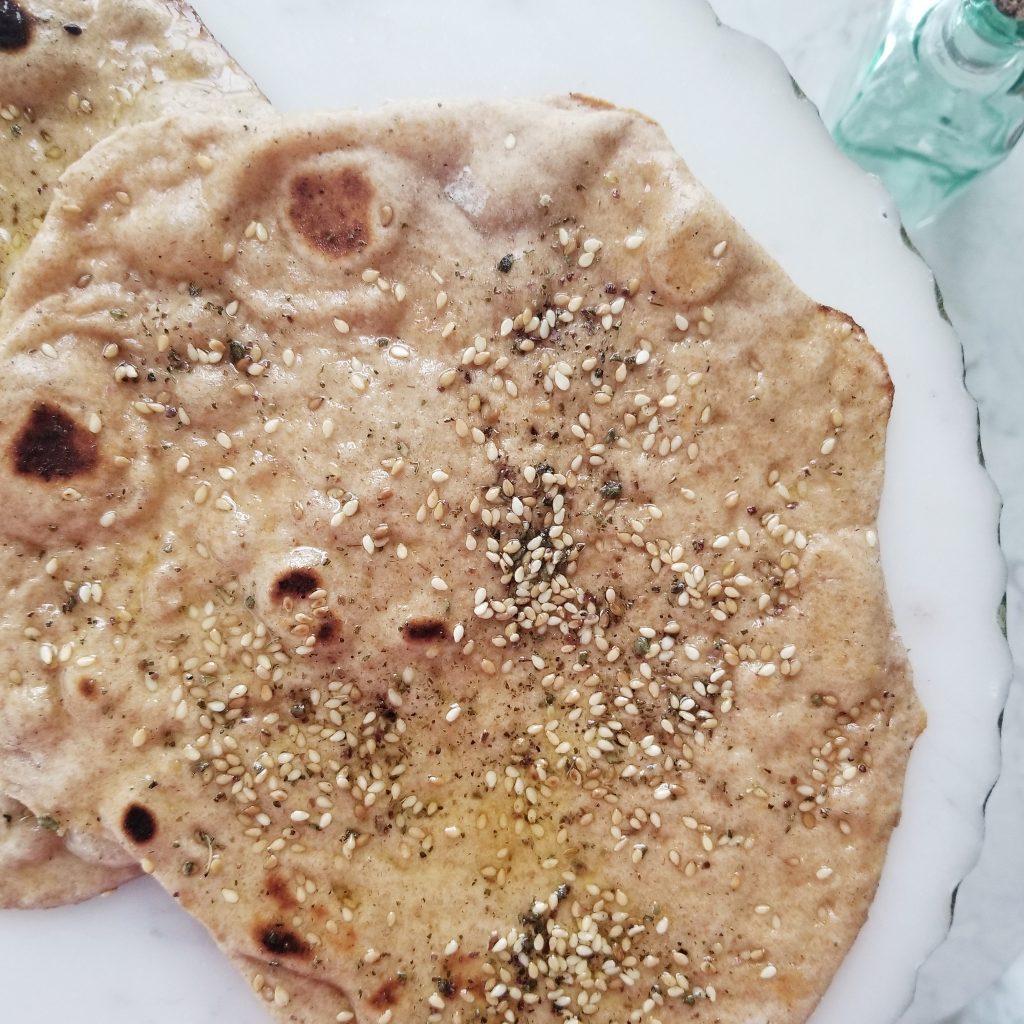 I really love naan bread. I think the first time I had it was in California years ago. But, I started thinking about all that buttery white flour and realized it is not the healthiest! I mean, don't get me wrong it is okay to eat that every once in awhile. But, if you're like me and like flatbread, this whole wheat naan is a great option!

If you're looking for something to dip your naan in, try my delicious homemade hummus!

I made it with 75% whole wheat flour and 25% all-purpose flour. You can absolutely experiment with those ratios to get the one that tastes best to you! I also used cashew milk in this recipe, but any milk, as long as it is unflavored, should work just as fine in here.

Yes! This is a healthy naan bread recipe with all healthy ingredients. Add some hummus on the side for a great healthy Arabic snack.

TIPS FOR MAKING THE BEST EVER WHOLE WHEAT NAAN BREAD

DO NOT MAKE YOUR MILK TOO HOT. Hot milk will kill the yeast and your bread will not rise. Ideal temperature for milk is room temperature up to 110 degrees Fahrenheit.

LET ACTIVE DRY YEAST GET FROTHY. Make sure to activate your yeast, this will give you an amazing bread flavor and a perfect rise.

WARM YOGURT TO ROOM TEMPERATURE. For a faster rise, get your yogurt out ahead of time so that when you mix it into the dough, it does not make the dough cold again. Warm dough rises faster than cold dough.

RISE DOUGH WRAPPED IN A TOWEL IN YOUR OVEN. If it is cold and drafty in your house, rise the dough in your oven where it is much warmer.

SHAKE ALL EXCESS FLOUR OFF ROLLED DOUGH. You don't want floury naan after it is done cooking because once you brush on the butter or oil the flour can make a pasty outside.

IS NAAN MADE OF WHEAT?

Most naan bread is made of enriched white flour. If you are looking for a healthy naan bread, choose one with whole grain wheat flour as the first ingredient.

Naan bread made with all purpose flour is not super healthy. It is good to choose whole grain products rather than bleached and refined products. For a healthy naan bread, pick whole grain or whole wheat flour naan bread, and eat white flour naan in moderation.

IS NAAN BREAD BETTER FOR YOU?

Naan is actually a very dense and flour heavy bread, despite it's thin appearance. 1 piece of naan bread can be more than double or even triple the calories and carbohydrate of 1 slice of standard bread. If you are looking for a lower carbohydrate bread, definitely pick a light and fluffy homemade loaf with a whole grain flour.

Whole wheat naan is a healthy alternative to traditional naan!

CAN YOU USE WHOLE WHEAT FLOUR FOR BREAD?

HOW DO I MAKE WHOLE WHEAT GARLIC NAAN?

HOW DO I MAKE WHOLE WHEAT NAAN WITH INSTANT YEAST?

The fix is simple! All you have to do, is mix all your ingredients together at once instead of proofing the active dry yeast! Instant yeast does not require activation and can be mixed right into everything immediately. The only difference is that, active dry yeast might give you more of a "bread like flavor" because of that little extra fermentation time.

IS YEAST OR BAKING POWDER BETTER FOR NAAN?

Yeast is better for naan! But, if you are in a rush, you can add in baking powder for a quicker rise. My quick whole wheat naan bread has such a short rise time because I used just a touch of baking powder.

Step 1: Start by proofing your yeast

My whole wheat naan is made with active dry yeast, which needs to be proofed before adding all the other ingredients. If you have instant yeast, read the FAQ's above!

Warm your milk until it is just above room temperature. The ideal temperature for proofing yeast is about 105-110 degrees Fahrenheit. If you make it too hot, the heat will kill the yeast and you will not see your dough rise!

Whisk your warmed milk with the sugar and the yeast. Let it sit for about 10-20 minutes. You will see a lot of activity after letting it sit!

Step 2: Mix your dry ingredients together

I like to store my whole wheat flour in the freezer. This is especially important in the summer so that the wheat doesn't spoil in the hot temperatures! It can last so much longer in the freezer and preserve the nutritional quality of it.

I take my flour out about an hour before I use it so that it can warm up to room temperature. I like the yeast to have a warm and friendly environment to grow in and help the bread rise. If you are using all-purpose flour, there really is no need to store it in the freezer, because there are no whole grain fats that will spoil very quickly.

Sift together the following ingredients in a bowl:

Add the yeast mixture and Greek yogurt to the center of the flour mixture.

You will notice that the dough is a bit stickier than your typical bread dough. This is good and how it is supposed to be! Knead it for ~2 minutes so that it has all come together.

Cover your bowl with a towel and let it sit somewhere warm. I usually use an old towel, if you think this is dirty it is just stained LOL.

Now that your dough has doubled in size (see the before and after below), it is time to make your whole wheat naan! Heat an iron skillet over medium heat. You will probably turn the heat down to low after the iron has heated up. Fun fact, cooking in an iron skillet helps to increase the iron in your food! So, if you don't eat a lot of red meat or have low iron then this is for you!

Divide your dough into about 10-12 equal shaped balls. Well, if you want different sized naans, you could make them bigger and smaller. Up to you.

I like to form them into round patties before I use the rolling pin on them. This really just helps to prevent any cracks and uneven edges.

Next, lightly flour your counter. Don't use too much because if you are brushing them with oil after, you don't want the oil to be soaking up excess flour.

Roll them out very thin. The thicker they are, the more chewy or "doughy" they will be. The classic naan is quite thin. And, when it is thinner it bubbles much nicer! I sprinkled some arabic spices and seeds into the dough as I was rolling so that the rolling pin would press them in.

Shake off the excess flour and place it flat on your iron skillet. Flip the naan with a pair of tongs after bubbles have formed on the surface. Cook the other side until golden brown. It will generally take less than a minute to cook on each side.

Find the iron skillets I use on Amazon

I sprinkled fresh Arabic Za'atar on top of my whole wheat naan, it is super delicious and flavorful!

Store it in an airtight container for up to 2 days at room temperature. For longer storage, keep it in the freezer. 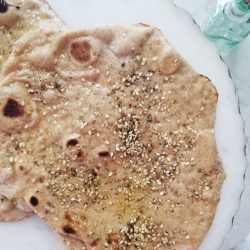 Naan bread, but healthier! I made this whole wheat naan bread with 75% wheat flour and it turned out so delicious! I was surprised that the wheat flour didn't compromise the taste of this, pleasantly surprised! My whole wheat naan bread is seasoned with Arabic Za'atar, but you can use anything you like on top such as garlic!
5 from 4 votes
Print Recipe Pin Recipe
Prep Time 20 mins
Cook Time 1 hr
Rising time 2 hrs
Total Time 3 hrs 20 mins
Course Appetizer, Side Dish, Snack
Cuisine Arabic, Indian, Middle Eastern
Servings 12 naan breads
Calories 148 kcal

Nutrition facts for any recipe on thehintofrosemary is only an estimate and may vary based on the specific ingredients you choose.