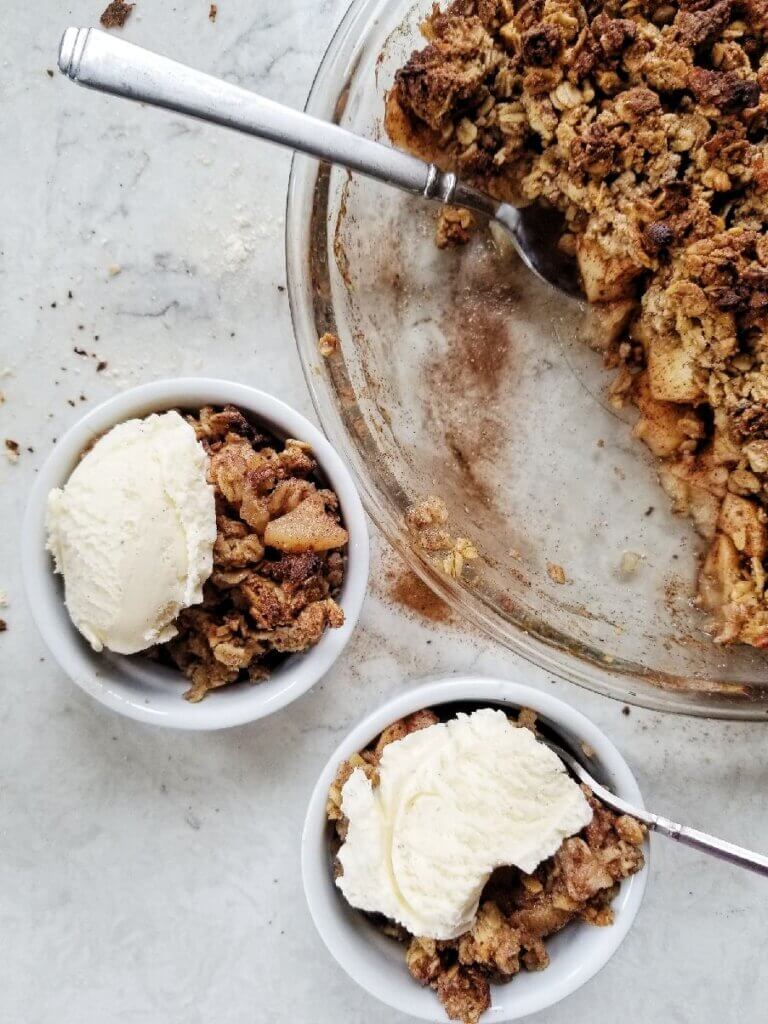 Healthy Apple Crisp with Oats and Almond Flour. My healthy apple crisp is made with good for you swaps like rolled oats, almond flour, pecans, and maple syrup. It is sure to satisfy any craving for apple crisp!

Apples. I used empire apples in my apple crisp because those are my favorite kind, but you can really use any kind that you like. For a sweeter flavor, choose from these varieties: Gala, Fuji, Ambrosia, Honeycrisp, Golden Delicious

Lemon juice. I added a little bit of lemon juice on my apples just to help the cinnamon stick a bit better. This also helps to prevent the apples from browning while you are preparing your topping!

Old fashioned (rolled) oats. You can either use old fashioned oats for a heartier topping, or use quick oats!

Pecans. I used raw pecans and then chopped them up. Since I was going to be baking them, I didn't want to buy roasted pecans and dry them out even more.

Cinnamon. Cinnamon is necessary for apple crisp right?? Make sure to buy fresh quality cinnamon for the best flavor !

Sea salt. Pink sea salt is less refined than table salt, which is bleached and sometimes has anti-caking ingredients added.

Coconut oil. I used coconut oil in place of butter in this recipe. Coconut oil is great because it is able to harden back up and give you a nice crumbly oatmeal topping for your healthy apple crisp.

Maple syrup gives this a bit of a sweet flavor. Pair it with a sweet variety of apples and you will have a delicious and sweet apple crisp without white sugar and white flour.

My healthy low calorie apple crisp recipe is made with no butter, no sugar, and no white flour!

Before I make a traditional recipe healthier, I like to look at (and usually make) the traditional recipe to see how it tastes and what goes into it. Traditional apple crisp is pretty straight forward. You have a base of apples tossed in cinnamon and sugar and topped with a crispy sweet crumble. My biggest obstacle for this was getting past the amount of butter and sugar that is in traditional apple crisp and still coming up with something that tasted good. I found that adding some chopped nuts to the topping not only helped replace some of the butter, but also helped make the topping nice and crispy. I was also able to reduce the amount of sweetener down to just ¼ cup without compromising the flavor. Here is the comparison of an original apple crisp ingredients versus what I used in mine:

WHAT KIND OF APPLES SHOULD I USE TO MAKE MY APPLE CRISP SWEETER?

It is true that some apple varieties are sweeter than others! You can surely use any type of apple that you have on hand, but I would choose one of the sweeter varieties in making this healthy apple crisp recipe, because there is not a lot of sweetener added.

Choose any of these sweet apples for the best apple crisp:

USE A SWEET APPLE VARIETY TO GET SWEET APPLE CRISP WITHOUT A LOT OF ADDED SUGAR. See the list of sweet apple above.

MAKE THIS HEALTHY APPLE DESSERT IN SEASON! Apples taste best when they are fresh and in season (September- November for here in upstate New York).

BAKE UNTIL THE TOP OF YOUR APPLE CRISP IS GOLDEN BROWN. Don't over bake or the pecans can start to dry out and taste bitter.

STORE YOUR APPLE CRISP COVERED FOR UP TO 3 DAYS.

WHAT'S THE DIFFERENCE BETWEEN APPLE CRISP AND APPLE CRUMBLE?

Both are baked fruit with a crispy and crumbly topping. However, apple crumble rarely contains oats like apple crisp does.

IS A BAKED APPLE HEALTHY?

Many people ask if a baked apple is as healthy as a raw apple. The short answer is no. Raw apples are healthier. But although some nutrients are lost from heat during baking, baked apples are still healthy dessert option and a great source of fiber!

HOW MANY CALORIES ARE IN A BOWL OF APPLE CRISP?

CAN I MAKE HEALTHY APPLE CRISP IN THE MICROWAVE?

No! This is a recipe you have to make in your oven or air fryer. The microwave will not be able to make the top crispy.

HOW DO I MAKE HEALHTY APPLE CRISP FOR TWO?

If you want this healthy apple crisp recipe for one or two, simply us ¼ of all the ingredients in the recipe. Then, divide the apples and topping between two small dishes (like ramekins) and bake in the oven until the top is golden brown!

HOW TO MAKE HEALTHY APPLE CRISP

This is a quick and healthy apple crisp recipe that you can have ready in under an hour!

First, start by preheating your oven to 350 degrees Fahrenheit.

Next, peel and chop 6 apples. Place the apples in a medium sized mixing bowl along with 1 tablespoon pure maple syrup, 1 tablespoon fresh squeezed lemon juice, and 2 teaspoons ground cinnamon. Toss the apples until they are all completely coated with cinnamon.

Pour the cinnamon apples into a round 9" glass pie dish.

Pour the oatmeal mixture evenly over your cinnamon apples.

Bake your healthy apple crisp in the preheated oven for 40-45 minutes or until the top is golden brown.

And that's it! Easy and healthy apple crisp done in under 1 hour! 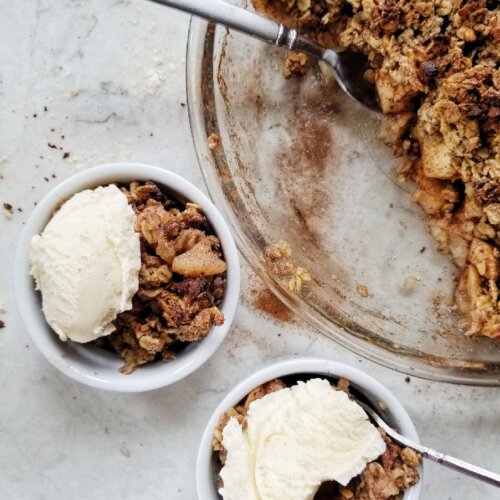 For the crumb topping:

For the healthy crumb topping:

Hi, I'm Rosemary the dietitian behind The Hint of Rosemary! I created the Hint of Rosemary back in 2015 because I wanted to share my healthy recipes and teach that healthy eating is fun and delicious. I make your favorite desserts, drinks, and smoothie recipes with healthy ingredients that make you feel good while advocating mindful eating. Mindful eating is about not depriving yourself of the food you love!