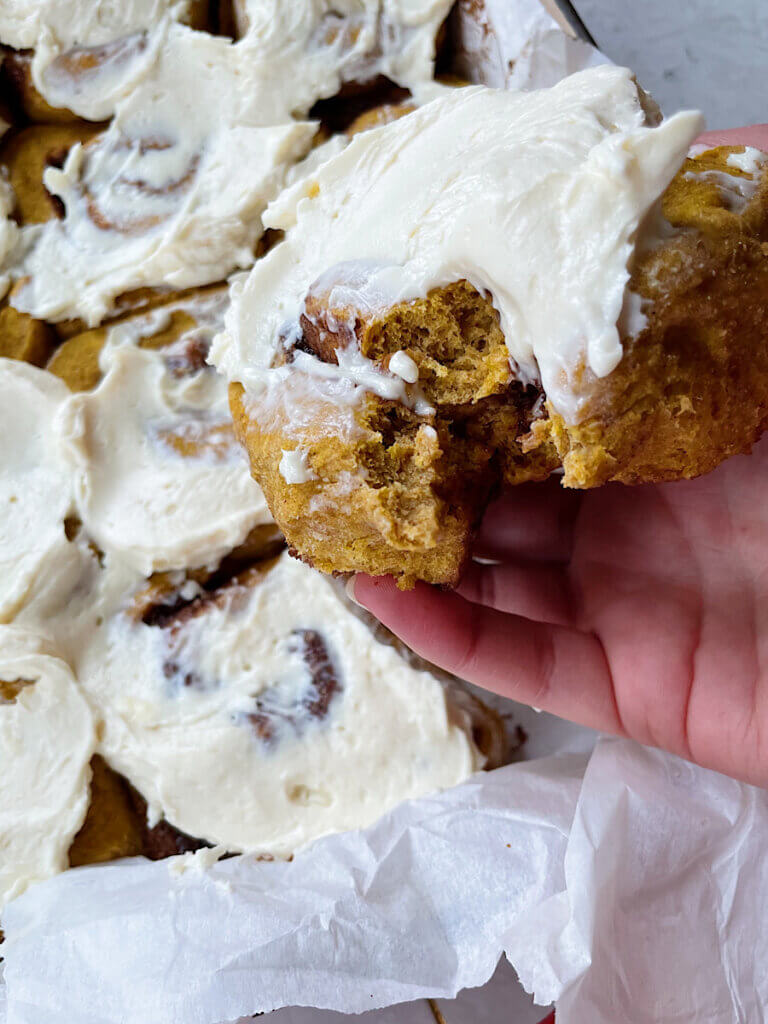 These are the best pumpkin cinnamon rolls you'll ever make! I love fall and winter for baking and I'm so excited to share my new cinnamon rolls recipe with you all. Cinnamon rolls are definitely my favorite dessert of all time.

HOW MANY CALORIES ARE IN A PUMPKIN CINNAMON ROLL?

HOW MANY CALORIES IN TRADER JOE'S PUMPKIN CINNAMON ROLLS- 330 calories.

HOW TO MAKE HEALTHY PUMPKIN CINNAMON ROLLS AT HOME

If you are making these pumpkin cinnamon rolls by hand, make sure to read the recipe notes in the card at the bottom! They are easy to make by hand, but definitely much less work in a standing mixer.

In the bowl of your standing mixer with the paddle attachment, mix together the warm milk, instant yeast, and maple syrup.

Next, add the pumpkin puree, melted (but not too hot or it will cook your egg) butter, and egg.

Mix the wet ingredients till completely incorporated, about 1 minute.

Add all of the flour, the pumpkin pie spice, and the salt. Mix until a ball comes together and the dough is not sticky. Drizzle oil over the top and rub all over the dough. Cover the dough and let it rise somewhere warm until it is double in size.

STEP 2- ROLL THE DOUGH AND RISE A SECOND TIME

Turn your risen pumpkin dough onto a floured counter top. Roll it into about a 14 x 16 inch rectangle. Brush the dough with soft butter.

(As you see in the video, I accidentally melted my butter too long and it was very watery which made a little more of a mess. Make sure your butter is soft and not totally watery).

In a small bowl mix together ⅓ cup maple syrup, 1 tablespoon ground cinnamon, and ⅓ cup finely ground walnuts. This is my mixture I used in place of brown sugar. Spread the healthy cinnamon roll filling across the top of the butter.

Roll the dough tightly into a log and press the seams together to help seal in the filling. Score the dough into even pieces and use a string to cut. Place each piece into a 9 x 14 pan. Cover the pan and rise about 30 minutes while your oven preheats.

Bake your pumpkin cinnamon rolls for about 20 minutes till lightly golden brown on top. Do not over bake them or they will not have a nice tender texture.

Allow your pumpkin rolls to cool completely before adding the cream cheese frosting.

Spread the frosting over the top of the cooled rolls and enjoy!

Hope you love them!

CAN I FREEZE HOMEMADE CINNAMON ROLLS?

Yes! Unbaked cinnamon rolls can be frozen for up to 8 weeks. Once they have thawed up and started to rise again, bake them in the preheated oven for 20 minutes. You'll never know the difference between frozen and unfrozen!

Yes! After you have placed the cinnamon rolls in a parchment paper lined pan, cover tightly with plastic wrap. Place in the fridge overnight.

Once ready to bake, rise at least 30 minutes or until the cinnamon rolls have doubled in size while your oven preheats. Once double, bake for 20 minutes as above.

HOW DO I MAKE DAIRY FREE PUMPKIN CINNAMON ROLLS?

In place of butter, use a vegan butter and in place of the cream cheese use coconut cream or vegan cream cheese spread. All other ingredients are already dairy free friendly.

HOW DO I MAKE VEGAN PUMPKIN CINNAMON ROLLS?

More healthier fall recipes you can make with pumpkin puree 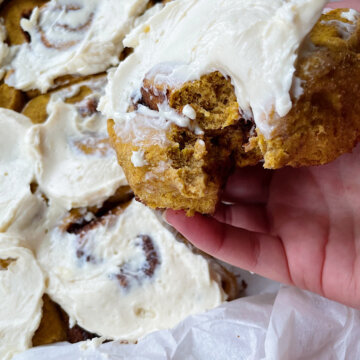 For the pumpkin cinnamon roll dough:

For the healthy maple filling:

For the lightened up cream cheese frosting:

Hi, I'm Rosemary the dietitian behind The Hint of Rosemary! I created the Hint of Rosemary back in 2015 because I wanted to share my healthy recipes and teach that healthy eating is fun and delicious. I make your favorite desserts, drinks, and smoothie recipes with healthy ingredients that make you feel good while advocating mindful eating. Mindful eating is about not depriving yourself of the food you love!