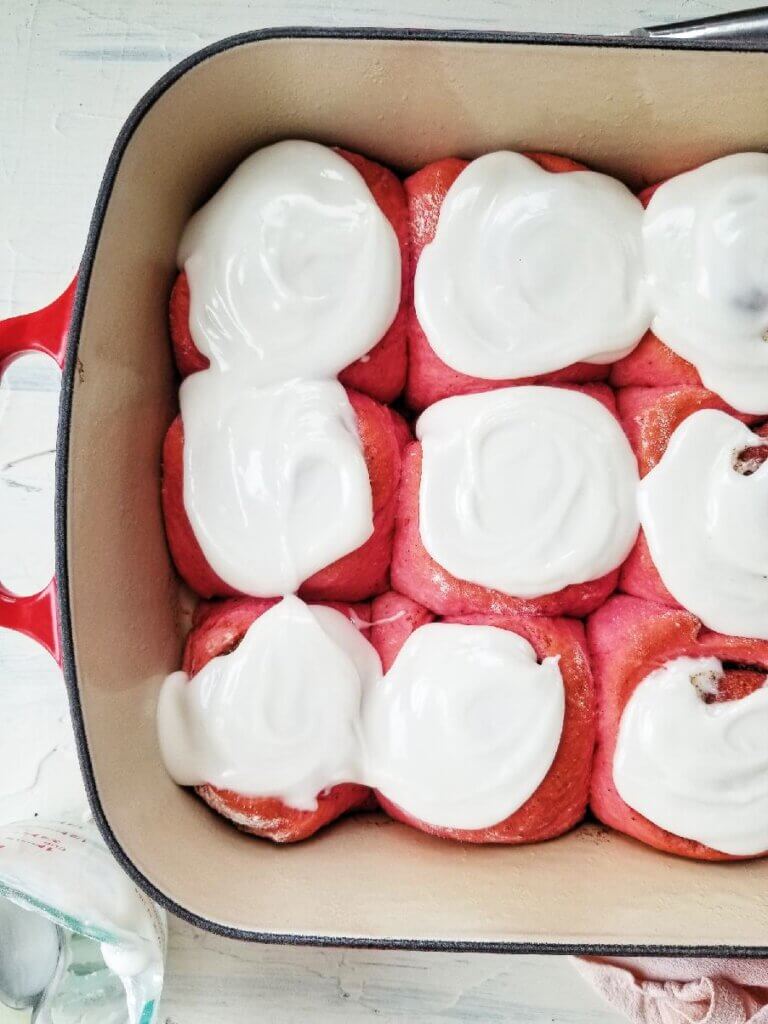 Valentine's day is right around the corner and I have been making pink and red foods like it's my full time job.

How to make your dough pink for valentine's day

What's the difference between cinnamon rolls and cinnamon buns?

Although they are both equally delicious, there is actually a difference between cinnamon rolls and cinnamon buns. Cinnamon rolls are rolled with a cinnamon and sugar mixture, baked, and then frosted directly in the pan after baking with a butter or cream cheese frosting. Cinnamon buns, on the other hand, are traditionally made with a sticky nut and sugar mixture poured into the pan before the rolled dough is placed on top. After baking, cinnamon buns are served upside down so that the sticky nut glaze from the bottom of the pan is now on top of the buns.

In the bowl of a standing mixer, mix together ¾ cup warm milk and 2 ¼ teaspoon quick yeast. Let this mixture rest for 5-10 minutes or until the yeast is frothy and activated.

Next, add 2 ½ cups of flour, ½ cup wheat germ, ¾ teaspoon pink sea salt, and 1 tablespoon pink pitaya powder. Turn your mixer on low with the paddle attachment and mix until the flour is incorporated.

Switch to the hook attachment. Knead the dough on low speed for about 8 minutes. Add more flour as needed. I ended up adding an extra ½ cup of flour (for a total of 3 cups), but it might vary depending on how humid it is where you live. Your dough should be tacky but not sticky. If the dough sticks to your fingers when you touch it, add ⅛ cup extra flour at a time. The dough should pull away from the sides of the bowl and form into a uniform ball.

Once you are done kneading your dough, remove the hook attachment and cover the bowl with a tight fitting piece of plastic wrap, and then a clean towel.

Allow your dough to rise at warm room temperature for 1-1 ½ hours or until doubled in size. If your house is cold, place your bowl in the oven and wrap it with another towel to keep it warm.

Once your dough is risen, sprinkle a clean counter with flour. Roll your dough into a large rectangle like this:

How to make filling for your pink cinnamon rolls

Brush your dough with ¼ cup melted butter or coconut oil.

In a small bowl, mix together ⅔ cup brown sugar and 1 ½ tablespoons of ground cinnamon. Sprinkle this over the melted butter. Make sure to leave about ½- 1 inch around the edges.

Begin to roll your dough up the long way. Make sure you are rolling the dough very tightly.

Tuck the edges under your dough log and pinch the ends so they are sealed and no filling falls out.

Use a sharp knife to score your dough log. If you want larger buns, make 9 even scores, or if you want regular sized, mark the log 12 times.

After you have scored your dough and the pieces look even, cut each piece through to the bottom.

How to bake pink cinnamon rolls

Grease or spray a 9 x 12 inch baking dish. Gently place each cinnamon roll piece into the bottom. Make sure to space them out evenly.

Cover the pan tightly with plastic wrap and then a towel (you can use the same one from the dough). Place your pan in a warm spot. I like to place mine on or next to the stove.

Preheat your oven to 350 degrees Fahrenheit. Let your dough rise 30 minutes in the pan while the oven preheats. The pink cinnamon rolls should be double in size in the pan before you bake them like below.

After they have doubled in size, bake them for 25 minutes or until the edges are lightly golden brown.

How to make frosting for cinnamon rolls:

Allow your cinnamon rolls to cool completely in the pan before you frost them.

In a small bowl, whisk together 2 cups of powdered sugar, ½ teaspoon pure vanilla extract, and 1-2 tablespoons milk of choice. Add more milk if you want a thinner texture.

Pour or spread your frosting over the top of your cooled cinnamon rolls.

Allow your yeast to activate in warm milk. Make sure the milk is not hot! If it is hot, it will kill your yeast and you will not be able to rise your dough.

Let your dough rise in a warm space. If you kitchen is too cold, your dough will take a really long time to rise. Yeast needs warmth to activate so if it is not too warm, wrap your bowl with a towel to insulate it and help keep it warm so it can properly rise.

Cover your pan tightly with plastic wrap and a towel to store them. Any exposure to air will make your cinnamon rolls go stale very quickly! If they have gotten a bit hard, simply heat one on a plate in the microwave for 10 seconds to soften it.

If you make this recipe, please be sure to tag your photo #thehintofrosemary on Instagram and leave me a rating in the recipe card! 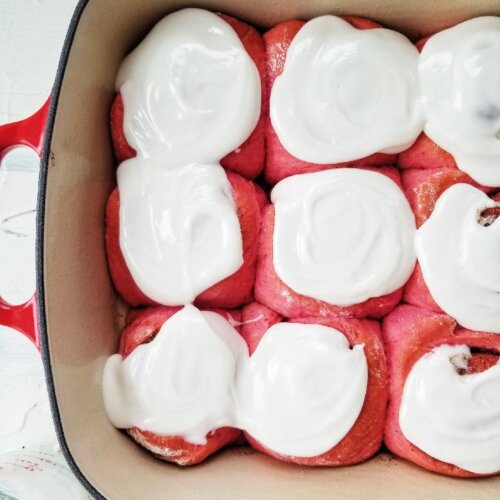 For the pink cinnamon roll dough:

For the vanilla glaze: (optional)

How to make the pink cinnamon roll dough:

How to make the vanilla glaze: