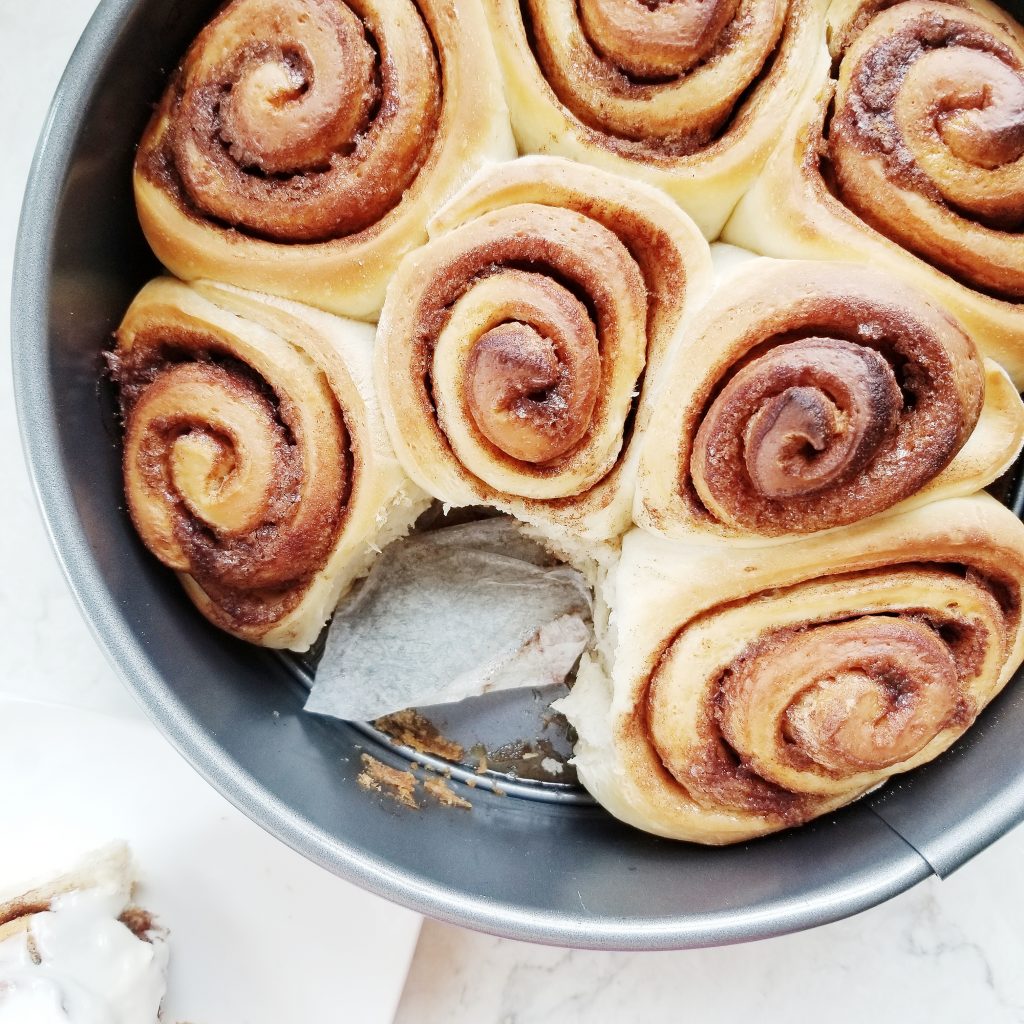 Okay so I just jumped on the sourdough train after 3 attempts to make a sourdough starter and I am LOVING it! I have made traditional cinnamon rolls for awhile and let me say, these vegan sourdough cinnamon rolls are the best I've ever made!!

And if you're not vegan, don't worry! You don't have to go out and buy special ingredients that you wouldn't otherwise use. Everything in this recipe can be substituted out 1:1! (example, if it says 2 tablespoons vegan butter, just use 2 tablespoons regular butter, etc.)

Click here if you need a sourdough starter recipe!

HAVE AN ACTIVE BUBBLY STARTER. Before you start, make sure you have an active and bubbly sourdough starter! This is a MUST for this recipe.

IF YOUR DOUGH IS VERY STICKY ADD ⅛ CUP FLOUR AT A TIME. Don't be tempted to add a bunch of extra flour all at once, too much flour will give you tough and chewy cinnamon rolls.

INSULATE YOUR BOWL. If your house is cold and drafty, you might have trouble rising your sourdough. Wrap your bowl with a thick towel and put it in the oven (turned off) during the rising times.

LEAVE ROOM AROUND YOUR CINNAMON SUGAR FILLING. Leave ~¼ inch around the edges so that you don't have the mixture leaking out and burning on the bottom of the pan while it bakes!

MAKE SURE TO ROLL THE FILLED DOUGH TIGHTLY.

RISE THE ROLLS IN THE PAN BEFORE BAKING. This really helps develop a soft and fluffy texture.

How can I make gooey sourdough cinnamon rolls?

If you want gooey sourdough cinnamon rolls, double the filling!

Can I make sourdough cinnamon rolls in cast iron?

Yes! You can bake these cinnamon rolls in a cast iron pan. Just be sure to line the pan with parchment paper to prevent them from sticking.

Can I use regular dairy in these sourdough cinnamon rolls?

Yes! If you are not vegan or dairy sensitive, you can easily substitute the dairy equivalent for all the ingredients in this recipe.

For the cinnamon roll dough:

For the frosting (optional):

NOTE: This is an overnight rise so plan accordingly!

Don't worry about being exactly at 12 hours. Actually, it varies anyway. If your house is colder, it will probably take longer to rise. If it is warmer, your dough will rise faster, around 8-10 hours.

HOW TO MAKE DOUGH FOR THE SOURDOUGH CINNAMON ROLLS

Heat the milk and butter in a dish in the microwave until the butter is just melted. Allow it to cool, but not so much that that the butter starts to harden. If you want to check the temperature it should not be hotter than 110 degrees F or it can kill the bacteria in the sourdough.

Fit your standing mixer with the paddle attachment. In the bowl of the standing mixer, add ½ cup of your bubbly active starter and the sugar. Mix until it is just combined.

While the mixer is still running, slowly pour in the milk/butter mixture.

Then, turn off the mixer and add the flour and sea salt.

Turn the mixer back on and mix just until a rough dough forms which takes about 1 minute.

Scrape the sides down and cover the bowl with a damp towel.

REST THE DOUGH FOR 30 MINUTES.

After 30 minutes, switch to a hook attachment.

Mix at #2 or #3 speed for ~8 minutes. The dough should pull away from the sides of the bowl and be very soft. It should not be sticky.

If your dough is sticky: mix in ⅛ flour at a time.

Coat a clean bowl with the olive oil. Add your dough. Turn the dough over once and rub the oil so that the dough is completely coated. Cover the bowl with a damp towel.

LET YOUR DOUGH REST ANOTHER 30 MINUTES.

After 30 minutes, stretch and fold the dough to the center ~ 4 times. This helps to aerate it.

Cover the bowl again with a damp towel.

REST YOUR DOUGH FOR 8-12 HOURS AT ROOM TEMPERATURE.

After 8-12 hours, your dough should be double in size like this picture below!

Look at that perfect texture!

Turn the dough onto a floured counter top.

Stretch and fold the dough a few times to aerate it again.

REST THE DOUGH ON THE COUNTER FOR 15 MINUTES.

HOW TO FILL YOUR VEGAN SOURDOUGH CINNAMON ROLLS

Melt the butter for the filling. Mix together the filling sugar and cinnamon in a separate bowl.

Using a pastry brush, brush the dough with the melted butter. Sprinkle the cinnamon mixture over the top.

Roll the dough up lengthwise.

Tuck the open ends together and under. (see below)

Score the roll with a knife so that you have 8 even pieces:

Isn't it so pretty!

Add parchment paper to the bottom of a pan.

Gently place the cinnamon rolls inside. Space them out evenly so that they have room to grow!

LET THE FORMED SOURDOUGH CINNAMON ROLLS RISE AT ROOM TEMPERATURE FOR 1-2 HOURS BEFORE BAKING. UNTIL THEY ARE DOUBLE IN SIZE.

One of my cinnamon rolls got loose and fell over LOL!

I tried to use a knife to save it:

They look good enough to eat!

Preheat your oven to 350 degrees. Make sure the rack is in the center of the oven.

Bake the sourdough cinnamon rolls for ~35 minutes or until they are golden brown on top!

Look at these beauties!

I was so hungry after smelling them all day I ate one immediately!

I LOVE frosting. But, you can totally skip it if sweet isn't your thing.

To make the frosting, just beat softened butter and cream cheese until it is fluffy. Add the powdered sugar, milk, and vanilla.

More sugar= fluffier frosting so adjust your sugar according to how you like your frosting!

Store them wrapped AND with a plate over the top. They can get stale quickly if they are exposed to air.

If you made my vegan sourdough cinnamon rolls recipe and loved them, please be sure to tag your photo #thehintofrosemary and leave me a rating in the recipe card! 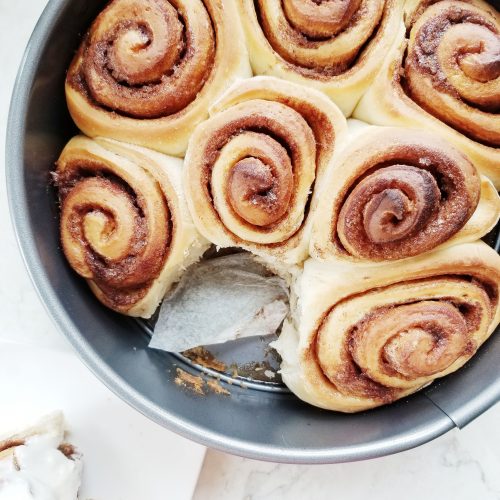 These are THE BEST sourdough cinnamon rolls you will ever make! The sweet dough is super fluffy and tender from the sourdough. And they are made vegan! If you are not vegan, you can easily swap anything out for the dairy version. This is an overnight rise recipe so plan accordingly!
5 from 8 votes
Print Recipe Pin Recipe
Prep Time 2 hrs 25 mins
Cook Time 35 mins
overnight rise 12 hrs
Total Time 15 hrs
Course Dessert
Cuisine American
Servings 8 rolls
Calories 339 kcal

For the frosting (optional):

Filling and preparing the cinnamon rolls:

Hi, I'm Rosemary a Registered Dietitian from NY! I created the Hint of Rosemary in 2015 to combine delicious food with the healthy science of nutrition to bring you fun, easy, healthy, and delicious recipes! Cooking has been my passion in life since I was a little girl! I love being in the kitchen, in the present moment creating new tasty recipes. I travel whenever I can to learn about other cultures foods & customs so that I can bring you authentic food from around the world, with a healthy twist!