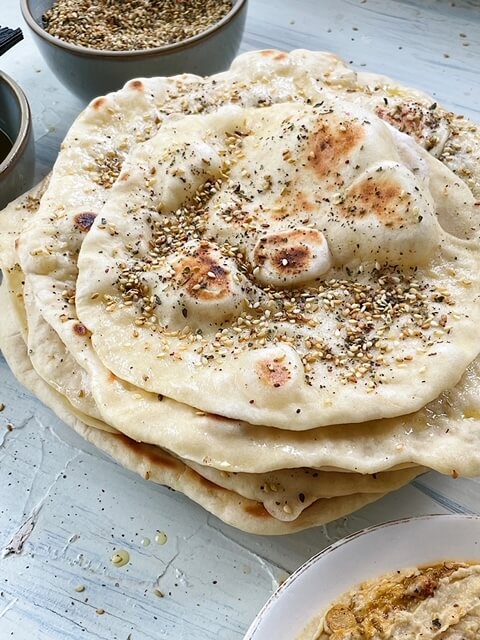 Naan Bread with Za'atar. My soft and fluffy homemade naan bread is so easy to make and seasoned with flavorful Arabic Za'atar spices.

My Naan Bread with Za'atar is:

I started making home made flat breads about 3 months ago when I was reading the back of a package and realized how much junk was in it! I looked up a recipe for naan bread and thought, this is so easy to make! And, I know exactly what is going into it.

WHAT IS ZAATAR NAAN MADE OF?

My naan bread recipe is a simple mixture of milk, yeast, baking powder, water, olive oil, salt, and flour. My naan is topped with za'atar. Za'atar is an Arabic spice made from a blend of sesame seeds, salt, thyme, oregano, and dried sumac. Za'atar is a simple spice blend but adds a massive amount of flavor.

TIPS FOR MAKING THE BEST EVER ZA'ATAR NAAN RECIPE

MAKE SURE MILK IS JUST ROOM TEMP. Hot milk will kill the yeast. Cold milk will not activate it.

THE WARMER YOUR KITCHEN, THE FASTER YOUR NAAN BREAD DOUGH WILL RISE.

KEEP A TOWEL OVER ROLLED BALLS OF DOUGH WHILE YOU PAN FRY NAAN. This helps them not dry out while you are cooking the bread.

START ON MEDIUM HEAT AND THEN REDUCE TO LOW HEAT. Since the iron skillet holds heat, I usually reduce the heat to medium-low after the first bread.

Frequently asked questions about how to make my zaatar bread recipe.

WHAT IS THE ENGLISH NAME FOR ZAATAR?

Za'atar is often used to season meats and vegetables, but you will most likely find it served on hummus with olive oil as part of a traditional Arabic breakfast. Similarly to hummus, za'atar can be served on top of labneh. Za'atar is most commonly used in the levant regions of Jordan, Palestine, Syria, and Lebanon.

HOW DO I MAKE CHEESE ZA'ATAR NAAN?

Cheese za'atar is a completely different recipe, called manakish, which is baked with cheese instead of pan fried bread.

WHAT DO YOU EAT WITH ZAATAR BREAD?

Za'atar bread can be used to scoop up hummus, labneh, or really anything that you are eating! If you are eating a traditional Arabic meal, be prepared to eat your meal with your bread instead of a fork or spoon!

WATCH HOW I MADE NAAN BREAD IN MY STANDING MIXER

Activating the yeast is really important. If you don't "wake the yeast up" you will not get that soft risen dough.

To activate the yeast, mix warm milk with ½ tablespoon of sugar and 2 ¼ teaspoons of yeast. I used plain soy milk for this recipe. But, you can use any type of milk that you have.

Mix the yeast, warm milk, and sugar until dissolved. Set it aside somewhere warm.

While the yeast activates, mix together the flour, baking powder, and salt. Form a well in the middle of the flour mixture.

You can tell that the yeast is activated when there is a foamy layer on top. See the picture below.

Once the yeast is activated, stir in the water and oil.

Pour your yeast mixture into the center of your flour mixture. Begin to combine it first with a fork. Once you notice the dough is coming together, you can use your hands to fully incorporate the flour. Or, use the hook attachment on your standing mixer to knead the dough.

Knead the dough until is is very soft and there is no more flour left.

Coat a medium sized bowl with about a tablespoon of oil. This helps the dough from sticking in the bowl after it has risen. Place your dough in the oiled bowl and turn once so the top of the dough is oiled.

Place a towel over the and put it somewhere warm to rise.

Usually it takes my naan dough 45 minutes to double in size.

Once it has risen, divide it into 10 equal portions. Roll each of the balls into a small disk and put a towel over them.

Heat an iron skillet with a splash of high heat cooking oil. The oil helps the dough to not stick the first time you cook a naan. I found that after the first naan is made, a layer of flour will be on the pan and prevent the other naan's from sticking. So, you don't really need to keep adding oil each time.

I start my pan on medium heat. Since the iron skillet holds heat, I usually reduce the heat to medium-low after the first bread.

Sprinkle flour over a clean kitchen counter top. Using a rolling pin, roll the bread into a rough oval shape.

Shake the excess flour off the rolled naan dough. Place the dough flat on the heated skillet. Once bubbles have formed on top, flip it over. Cook the other side until it is golden brown and then remove it from the pan.

You will see those gorgeous golden brown bubbles on top of your naan bread and that is how you know that you have made perfect naan!

Get the iron skillet I use to make naan in here on Amazon:

Brush the naan with some melted butter or olive oil.

I like to sprinkle mine with Arabic za'atar spices.

But, you can also use:

NAAN ZA'ATAR BREAD HOW TO EAT

Serve naan za'atar bread alongside any Arabic meal. It can be eaten on its own, to scoop up dips, or even be filled as a wrap!

How to make naan bread dough:

How to cook naan bread:

How to store naan

Nutrition facts for any recipe on thehintofrosemary are only an estimate.